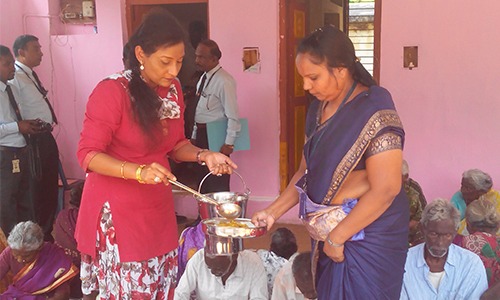 On 15th August 2011 Col. David Devasahayam and Dr. Renuka David distributed Sarees, Dhotis and Shirts for women and men to the beneficiaries.

Col. David Devasahayam and Dr. Renuka David visited Arungundram village Panchayat School and gifted tables and chairs for the school to be used by the children.

This school caters service to mentally challenged children.
Rs.21,000/- was given to the school for maintenance.
Play and Study equipment for the children were also provided for Rs. 50,000/-.

On 21st December 2011 care-taker meeting was conducted in Oragadam Community hall.
Care-takers of Arungundram, Oragadam, Kazhanipakkam, Acharavakkam off ECR villages participated in the meet.
The scope of Ashraya Project and its sustenance was also addressed.
A questionnaire was given to all the care-takers to assess the understanding of the project and sharing of good practice across the centre.

On 21st January 2012, Care-taker meeting was conducted in Vayalanallur village off
Poonamallee Sector for Avadi and Poonamallee village care-takers. General Manager Mr. F.A.S. Paul headed the meeting. Care-takers from Kavalcherry, Vayalanallur, Pidarithangal, Arunthathipalayam and Mettukulathur of Poonamallee Sector and Melpakkam, Vellacherry and Kadhavur of Avadi Sector participated in the meet.